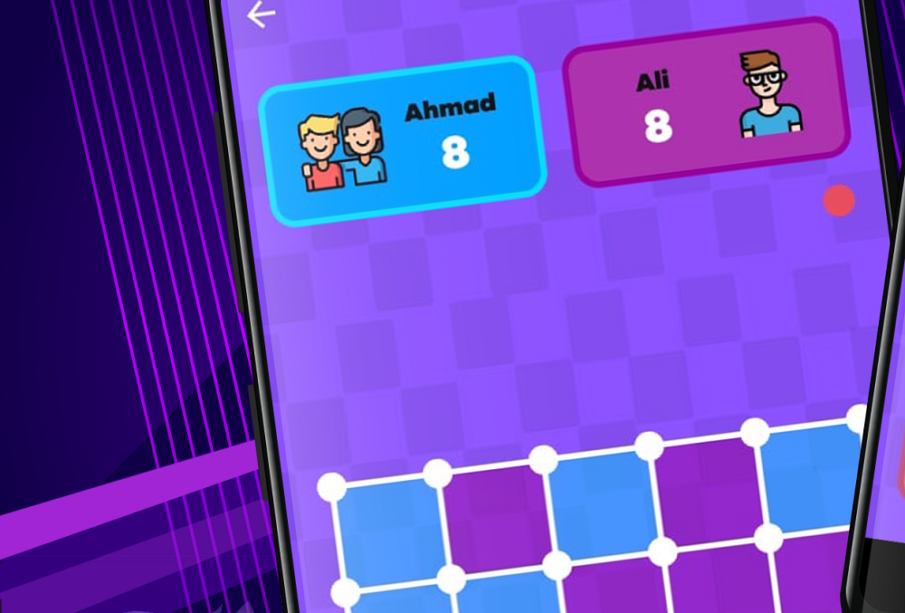 Among pencil-paper games, “dots and boxes” is a very famous game. It is popular among children and adults as it can be easily played and have very simple rules. In a game of Dots-And-Boxes, the players draw a rectangular grid of dots and take turns drawing lines between pairs of horizontally- or vertically-adjacent dots, forming boxes. The size of the game is defined by the number of boxes. To capture a box player has to complete the fourth line; when all the lines have filled, the player who captured the most boxes is the winner. If both players play optimally, there is no outcome of the game. For dots and boxes, the most used technique is Alpha – Beta “minimax”. The old techniques cannot be used due to copyright reasons and previous state of the art. There is a use of some generic search techniques in Dots-And-Boxes. These techniques are commonly used in the heuristic search, but there are non-obvious adaptations of them to the domain that greatly improve their effectiveness. Any person can play a classic line puzzle and dot game to recall their childhood. There are several other names for this game as Paddocks, Dots and Dashes, Smart Dots, Square, etc.

HOW TO PLAY Dots &Boxes:

The goal of the Dots and Boxes game is to join the dots and make squares. For every round, a player has to connect two dots to draw a line between two adjacent dots, which may be either horizontal or vertical. The player gains a point if he makes a square with all sides closed with lines. This is a two-player game. The player with more number of squares will be the winner.

Dots & Boxes game is available in the following modes:-

“Following the optimal strategy is key to win any strategy game.” There are some rules you can follow while playing the game

The minimax algorithm is an algorithm that evaluates the value of a position in a combinatorial game by looking down the game tree based on the principle that the enemy aims to minimize the player’s score while the player aims to maximize it. In theory, this algorithm should be able to play any game on m \times nm×n grid optimally. However, the algorithm is only implemented when the number of moves is less. This is because as the number of boxes on the grid increase, the possibilities increase exponentially.

In most games, states exist whose optimal moves are easy to determine. For trivial examples, consider games like TicTac-Toe or Connect Four, where one wins by having a certain number of pieces in a line. If the current player can make a move that completes a winning line, or prevents the opponent from completing a winning line on their next move,

then the optimal move must be to fill in that position.

Transposition tables are a well-known technique for reducing duplicate work in depth-first searches. A transposition table is a cache of explored states that associates with each stored entry its backed-up minimax value. If a newly generated state has been previously explored, its stored value can be retrieved, avoiding the duplicate work of determining its value a subsequent time.

There are several trivial symmetries in Dots-And-Boxesthat reduce the problem space. The mirror image of a state is also a legal game whose optimal strategy mirrors that of the current state. All Dots-And-Boxes instances have horizontal and vertical symmetry, and square boards have diagonal symmetry. We store canonical representations of states in the

transposition table so that all states that are identical under symmetries map to the same entry. These symmetries reduce the size of the search space by a factor of 4 on most boards and a factor of 8 on square boards.

The order that Alpha-Beta explores children of a node strongly influences the amount of work required to determine its value. An effective move-ordering heuristic sorts move in decreasing order of value for the current player, under the intuition that making stronger moves first will tighten search bounds for later moves, creating more search cutoffs.

As many may have found out before, the way to change the turn in favor of Player 1 for mirror tricks is to give away the center box so that Player 2 is effectively playing ahead of Player 1, allowing him to copy. While most might think this automatically spells doom for Player 2 if they let it happen, it does not.

Don’t let Player 1 give you center box. If they seem to be forcing you to take it, make sure there are un-copied lines somewhere else one the board. Also, try to circle the center block, incorporating it into a waving chain that counts as “1” so that if they mirror you the rest of the way, the count will remain odd.

The margin of victory is given optimal play and the optimal opening move. For each problem considered in Experiments, we generated these values using Wilson’s solver, as well as solver with each search feature described. The result was the same in all cases, giving us a high degree of confidence that the proofs generated by our solver are correct.

Everyone makes mistakes; sometimes, you can use this to your advantage. If you are a follower, you can sometimes take the opportunity to give a chain away early.

If your opponent forgets to sacrifice the two boxes in the end, the count will drop by one, which can sometimes result in victory if your sacrifice did not give away too many boxes. To avoid excessive sacrifices, pick the smallest chains to sacrifice

FEATURES OF Dots and Boxes Game

ü Dots and Boxes is a simple classic game

ü Suitable for all ages

ü Can be played offline

There are several reasons why Dots-And-Boxes is a game worth studying. First and foremost, it is an extremely popular and widely known game and is familiar to a wide variety of people from around the world. Also, it is an exceedingly simple game; the difficulty in solving the game comes primarily from the size of the problem space and not from any inherent complexity in the rules themselves. Finally, the game is an unusual example of an impartial game that cannot be addressed by the Sprague-Grundy theorem; most of the games addressed in the literature are partial. Despite this, there has been remarkably little coverage of Dots-And-Boxes in the literature; what material exists does not discuss applying computational search. As a consequence, the value of each of the existing techniques is unknown. Our paper is the first to synthesize these techniques and present them in the context of heuristic search, providing a thorough discussion of their utility.

The combination of these techniques, along with some non-obvious modifications, generic techniques, have allowed us to solve the previously unsolved 4×5 game. More importantly, however, our solver establishes a formal benchmark against which future research on this problem can be judged.

Top 5 Themes You Can Adopt For Your Professional Website

The Importance of Affordable SEO Services for Small Business!