11 Most Interesting Moose Facts You Need To Know 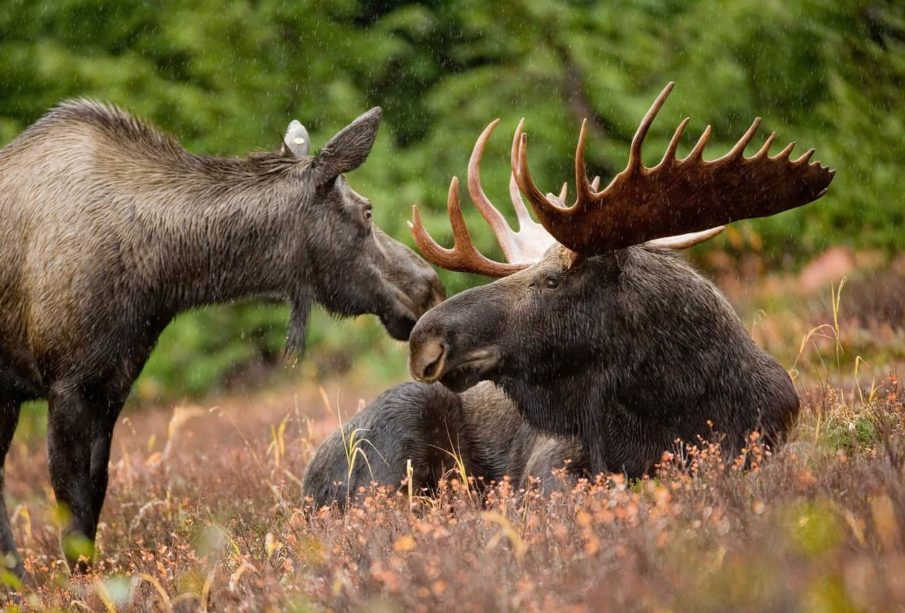 Among all other deer species, the moose is considered the biggest. For years, moose has been an essential source of food and clothing for the native Americans living along the major rivers of Alaska. This animal is also a member of the New World Deer sub-family. It’s considered not just the biggest but the most massive extant species, weighing more than a standard motorcycle.

With that, it becomes more interesting to know this majestic animal and what it could do. So if you want to know more about this particular deer species, here are some of the moose facts you might want to know.

Moose Have a Massive Appetite

During winter, a moose usually eats a total of 30 pounds daily. On the other hand, when it’s the hottest season, they typically consume around 70 pounds of food daily. This is probably one of the most exciting moose facts you need to know. Usually, they eat water plants, shrubs, bark, and any types of woody plants. When it’s winter, they just eat plants and buds of trees.

Canada is Where You Can Find Most of the Moose

You can find the most number of moose in Canada. Although they also reside in Lithuania, Latvia, and Estonia (The Baltics). Besides that, you can also find many moose in Fennoscandia, Alaska, and New England.

Moose Can be Infected Easily

With its sharp hooves and huge antlers, a moose can be a dangerous opponent. But despite their intimidating look, they still have predators. Their usual predator is the wolves and bears, which picks off young mooses. Typically, they hunt those who are old and sick. With this, a single bite from either predator could cause an infection that can kill even a healthy moose.

The Second Largest Population of Moose Can be Found in Russia

The Lifespan of a Moose Has Shortened Over Time

Typically, the lifespan of a single moose is 25 years. But, because of intensive hunting by most people, they only live for about ten years. It’s actually a sad reality today. The good news is that moose aren’t endangered today, and we wouldn’t also want that to happen, right?

Male Moose Was the Most Targeted by Hunters

The bulls or male moose are the primary targets by most hunters. Compared to female moose or cows, around 10% of the total population of bulls reach the age of five years. On the other hand, female moose can live up to ten to twenty years old. Hunters hunt male moose because of their antlers, and they are also typically more massive compared to cows or female mooses.

Female Moose Has a Pregnancy Period of 243 Days

While the human female has an average length of 280 days of pregnancy, the female moose has 243 days. It’s approximately eight months before they give birth to their calves. They also usually gave birth to just one or two calves. Having three calves is already considered rare.

Moose Has a Plural of Moose

People are often mistaken about the plural of moose. Some say that it’s “Meese” or “Moses,” but that’s not the case. The only plural form of moose is still moose.

Moose Don’t Socialize with Other Animals

While most deer species have herds, moose are better off living on their own. They are considered solitary animals, except for the young moose or calves, as they need to stay with their mother until they become adults. The only time moose socialize with their species is when it’s mating season. This is also one of the most interesting moose facts.

The reason moose dive is for them to reach the plants at the bottom of lakes and rivers. For them, it’s considered a treat. They can actually dive around 20 feet deep or 6 meters. Their big nostrils are comparable to a snorkel, which they use as valves to keep the water out when diving.

The Biggest Moose was Hunted in Alaska

The biggest moose has a height of 7.6 feet tall and weighs almost a ton with 820 kilograms or 1807 pounds. This was recorded in Alaska, Western Yukon in September 1897.

There’s a lot more to know about the life of moose, and the list above is just some of the most primary information about them. Sometimes, it’s just sad to think that hunters are hunting these lovely creatures living peacefully. But as mentioned earlier, that’s the unfortunate reality of what we’re living right now. Despite that, they continue to live peacefully and independently.

Object Emojis: Their Meanings and the Best Time to Use Them